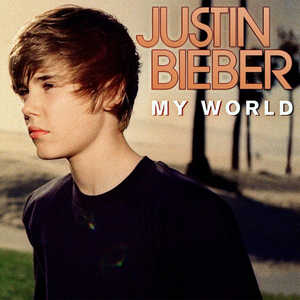 My World is the debut extended play (EP) by Canadian recording artist Justin Bieber. It was released on 17 November 2009, by Island Records. The album is considered the first half of a two-piece project, later being supplemented by his debut studio album My World 2.0 (2010). After signing a recording contract in light of his growing popularity on YouTube, Bieber worked with collaborators including his mentor Usher, in addition to producers Tricky Stewart, The-Dream and Midi Mafia. It's music incorporates pop and R&B styles, and lyrically discusses teen romance and coming of age situations. Upon its release, My World received generally favorable reviews from music critics, who complimented its production. It debuted at number six on the US Billboard 200 with first-week sales of 137,000 copies. In doing so, it became the strongest-debuting release for a new artist in 2009, though it was topped the following week by I Dreamed a Dream by Susan Boyle, which moved 701,000 units. Upon the release of My World 2.0 in March 2010, its predecessor peaked at number five. Less than two months after its release, the record was certified platinum by the Recording Industry Association of America (RIAA) for sales exceeding one million copies. Internationally, the extended play attained similar success. It debuted atop the Canadian Albums Chart, where it was later certified double platinum. It additionally attained double platinum recognition in the United Kingdom. Two singles were released from My World, both of which became international successes. Its lead single "One Time" reached the top twenty in five countries' singles charts, while its follow-up "One Less Lonely Girl" peaked within the top ten in Canada and top fifteen in the United States. The promotional singles "Love Me" and "Favorite Girl" peaked in the top forty of the US Billboard Hot 100. The project was additionally promoted through television appearances and the My World Tour in 2010. The remix album My Worlds Acoustic and compilation album My Worlds: The Collection were released later that November; the latter packaged My World, My World 2.0, and My Worlds Acoustic into a two-disc set. On February 12, 2016, the EP was released on vinyl for the first time. User-contributed text is available under the Creative Commons By-SA License; additional terms may apply.